It’s not often you run into a “game changer” as Guy Bonifas of Montgomery, AL calls his new invention. As a construction manager with Crown Castle for the past six years, Bonifas has had a front row seat to the trials, tribulations and dangers involved in gin pole usage at tower sites.

“After witnessing numerous tower crews fight with the new heavier multiport antennas,” to get them into position on the sector mounts, he told Inside Towers, “ I started thinking how much safer and easier and cheaper it could be if we take the crane out of the equation.” He began designing the device in 2007, with some quick sketches on an Office Depot pad (see above). Eureka! The Spartacus Gin Pole was born.

“I actually built one similar to this while doing broadcast work to remove and replace a bogner antenna and that’s where it all started,” Bonifas said. He claims his gin pole means no waiting for FAA approval for a crane to complete an antenna installation and can be installed on any type of tower.

“Even if it’s installed at the top of the tower it will not exceed the authorized FAA height,” he said. The Spartacus will require a Class IV Rigging Plan to use and should be out of fabrication in a couple of weeks.

We're not around right now. But you can send us an email and we'll get back to you, asap. 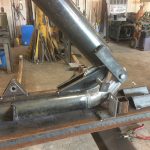 Birth of a Gin Pole!Uncategorized